Much like building your own computer, you’ll find that building your own security system at home not only takes a large degree of effort, but requires a whole lot of prior research as well, being that you’ll have to go into it with the right knowledge. While building your own system can allow you to customize said system to your heart’s content, you may not even need such a level of customization in the first place. As such, choosing to buy a Surveillance DVR kit instead can save you a whole lot of grief with little downsides.

This review will help you find the perfect surveillance DVR kit for your needs, taking a large amount of effort out of the equation that is setting up your home security system. 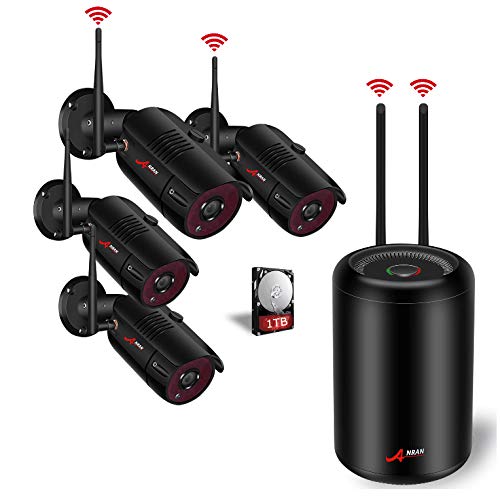 5/5 Product Rating
There are a variety of DVR kits on the market, each with their own specific target demographic. The Anran Four-Channel Network seems to be most marketed (and most suitable) to those looking to do some small-scale capturing, though with a high degree of effectiveness. This is seen immediately through the four cameras that come with the package. Four cameras should prove more than enough for either complete indoor or complete outdoor surveillance of a standalone residential property or a small commercial property. As such, you can be sure you’re getting just what you need to set up the perfect security system without paying for any features or pieces of hardware that might go unused. Simply put, the Anran Four-Channel Network give you exactly what you need; no more, no less. Not only does this leave it as being one of the more effective products of its type currently on the market, it makes it a rather frugal option as well, at least when compared to other units of the same degree of quality.

This everything-you-need attitude shines through not only in the unit’s amount of included cameras, but in all of its specs. Its video quality is a great example of this. With a screen resolution of seven hundred and twenty pixels, you can be sure you’ll never run into issues regarding your ability to pick out the small details while watching your captured footage. The only time a higher screen quality could possibly be beneficial is if you’re recording footage tens of feet away. Of course, this likely isn’t an issue for smaller buildings. Once again, you’ll have everything you need to effectively monitor your property without paying for features you know you’ll never use. As such, the Anran Four-Channel Network could be considered as being one of the very best DVR kits in the market, both in terms of its level of effectiveness and the great value it offers its customers. 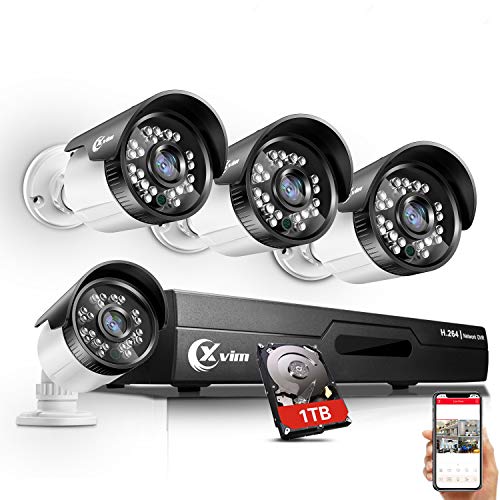 4.8/5 Product Rating
The XVIM Eight-Channel DVR Surveillance Kit is much more heavy-duty in stature than the above kit we covered. While it may still be used for monitoring larger residential properties, it may be most suitable for medium-sized commercial buildings. With eight cameras included in the unit, you can be sure you’ll pick up on anything that goes on in or around your property, assuming the cameras in question are set up accordingly. Despite this, it comes at roughly the same price as the above model.

Of course, we can’t very well have everything. Because you’re essentially getting twice as much hardware for roughly the same price, you can bet you’ll be making a couple of sacrifices for the privilege. For example, it comes with no advertised warranty to speak of. Though, if you’re confident that your new camera setup will last for a great deal of time (as it has for previous customers time and time again), you may find yourself saving hundreds of dollars by choosing to go with the XVIM Eight-Channel DVR Surveillance Kit.

The kit also comes with all of the features you’d expect to find in DVR kits fitting within its price range. It has great night vision, an above-par video quality and a great weatherproofed outer casing. All in all, the XVIM Eight-Channel DVR Surveillance Kit is easily your best choice if your main priority is getting the best bang for your buck. It’s certainly one of the best on the market and is the best within its price range. Of course, this is all assuming you need eight cameras to begin with. Otherwise, the above model or the below model we’re about to cover will be one of your better choices. It’s all a matter of just where it is you plan on setting up your security system to begin with. 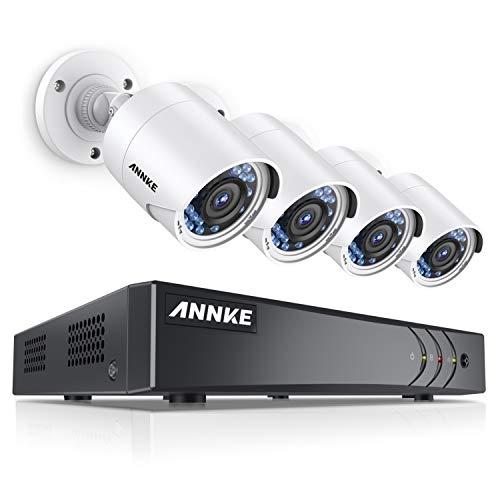 4.7/5 Product Rating
The ANNKE Eight-Channel Video Security System comes with four included cameras, making it one of your best options if you plan on covering a small business or even a large house with cameras. Similar to the first DVR kit we covered, the ANNKE Eight-Channel Video Security System focuses on giving you just what you need without having you pay a premium for a variety of fancy features which might otherwise only be suitable for much larger establishments.

The main difference between this model and the first model we covered all comes down to the video quality. Simply put, you just can’t find a similarly-priced model which offers as high a video quality as the ANNKE Eight-Channel Video Security System. This is great if you know you’ll be monitoring large stretches or if you won’t always have the best lighting at your disposal. In terms of its ability to pick up on every little detail in a clear and crisp manner, it doesn’t get a whole lot better than the ANNKE Eight-Channel Video Security System. Its high video quality and low price give it a place in the DVR kit market that isn’t likely to go away any time soon.

Summary of Our Top Picks
Depending on your own personal needs, you may find that one of the above DVR kits stands out among the other two. If, for example, you have quite a bit of ground to cover (think the size of a car dealership) and you want to keep any potential blind spots to a minimum or eliminate them outright, you can’t beat the XVIM Eight-Channel DVR Surveillance Kit. With its eight included cameras and its relatively low price, you’ll find it offers a large amount of coverage relative to each dollar spent on the purchase.

On the other hand, you may have no need for eight cameras. If so, one of the other models may offer you as much security as you could ask for while throwing some added features into the mix. The Anran’s included warranty is certainly a great thing to have. Or perhaps you’d rather get the best video quality available by going with the ANNKE. Choosing between the two truly all comes down to a matter of priorities.

What is a Surveillance DVR Kit?

If neither of the above DVR kits seem to be what you’re after, there’s still a whole world of kits to explore outside of the above list. However, because I can’t give you feedback on any model you may happen to have your sights set on, you’ll have to choose carefully. By keeping some of the below considerations in mind, making the right choice should be a piece of cake.

How many cameras do you really need?

You should already know the answer to this question before you begin shopping for DVR kits in the first place. In fact, you should know exactly where it is that you’re going to place any given camera. Before even considering picking up a specific model, take a walk around your house and pick out the best spots for cameras. Keep these spots in mind or mark them with a piece of wall tape to come back to them later. How many spots did you pick out? Keep this number in mind while shopping. You certainly don’t want to buy more cameras than you need, or even find yourself with an unusable kit that has less cameras than you need.

How often will you be checking on your DVR kit?

Some products will come with smartphone capabilities which can be fully utilized after the download of a free app. If you plan on checking your cameras once or more per day, opting for such a feature can save you a whole lot of time, as you’ll be able to check up on the day’s footage on your lunch break at work or on the bus. While this feature may sound more luxurious than it does practical, this couldn’t be further from the truth. On the other hand, if you only plan on checking your cameras on an as-needed basis, you may find such a feature will have you paying extra without offering much in the way of added benefits. The choice is yours.

How much virtual space do you need?

The unfortunate fact of the matter is that virtual space takes up physical space. It may also put a dent in your wallet. If you know you’ll be cycling through your footage on a daily basis, there is simply no need to purchase a DVR with one terabyte of storage. On the other hand, such storage will prove essential if you plan on letting your footage sit unchecked for long periods of time.

Video Quality – How Much Do You Need?

We’re not talking about a plasma screen TV. When it comes to DVR kits, you only need a kit whose video quality is high enough for you to see what’s going on at all times. But what level of quality is high enough? This will depend entirely on where you plan on setting up your cameras and how far away they need to be.

Under the majority of circumstances, a 720P camera is really all you need. In fact, you could probably go lower than this, though playing it safe with 720P is always a good idea. For capturing a long stretch like a very long isle in a very large store, it might be beneficial to go with a DVR kit which employs 1080P cameras. For homes and smaller commercial properties; however, this may prove to be more overkill than anything.

As with any type of product, there are certain features which might be found in DVR kits which indicate that the kit in question is more likely to be of a higher quality. Such features are always useful and are always worth the additional cost.

Outside of USB ports and a good video quality, it’s not up to me to tell you exactly what features are most likely to suit your needs. By keeping the above buyer’s guide in mind and considering the three DVR kits we covered earlier, you can be sure you’re getting the perfect product for you. By deciding which features you need and which features you can do away with, getting an effective DVR kit for a moderate price is a very realistic outcome to shoot for.

Minneapolis has a slew of restaurants available that cover every possible food craving you could have.  Some say that you can find the best…