Best Earplug for Swimming in 2020 - Earplug for Swimming Reviews and Ratings
ThoroughlyReviewed is reader-supported. When you buy through links on our site, we earn a small affiliate commission at no additional cost to you. Learn more
Nothing spoils a great day at the beach like
trying to get water out of your ears for the
entirety of the following week. As such, it only makes
sense to have a pair of earplugs around whether
or not you plan on using them. Better to
have them and not need them than to need
them and not have them.

This review will cover three of the best ear plugs on the market and go on to illustrate just what it is you should look for in the best product. As you’re about to find out, finding yourself the best earplugs is a breeze. 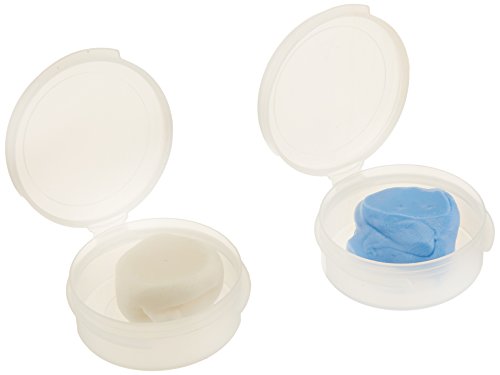 Radians Custom Molded Earplugs, Blue
$9.50
View on Amazon
5/5 Product Rating
This Radians product, as clearly suggested by its name, is an earplug which is not only meant to be placed in your ears and left as is, but is made of a putty-like substance that will actually dry in a way that fits the shape of the ear in which it sits. This has quite a few advantages which are sure to give you an added degree of protection that you just can’t get from the vast majority of similar products on the market. For starters, most earplugs just block the hole leading to the inside of your ear. While this may seem like an obvious strategy, it leaves one major issue; one little tug is all it takes to completely bring down the barrier between your inner ear and the water which surrounds it. It is the solution to this issue that put these Radian earplugs on the map in the first place and it is this same solution that keeps them on the map.

Despite how it may sound, these earplugs are actually rather convenient when used in the long run. In fact, the only time you’ll be messing around with them to form a shape is for the first ten minutes after you take them out of the package. Upon placing them in your ears and letting them dry into the right shape, you’ll be able to use them over and over again without worrying about shaping them. If you’re willing to go through the process of shaping them in the first place, there’s simply no reason to go with any other brand. 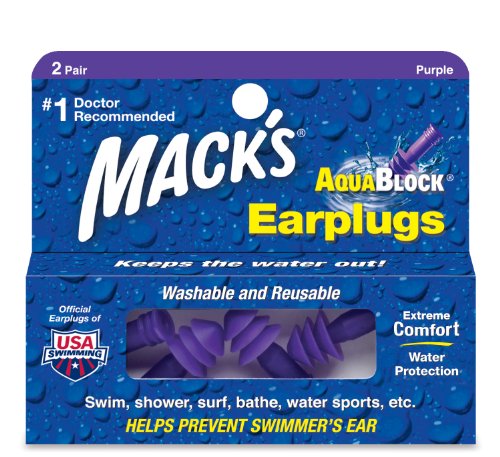 170 Reviews
Mack's AquaBlock Earplugs, 2 Pair, Comfortable, Waterproof, Ear Plugs for Swimming, Snorkeling and Showering (Pack of 2)
$9.99
View on Amazon
4.8/5 Product Rating
Of course, you might not be willing to go through the process of shaping your earplugs. If this is the case, this particular earplug made by Macks is certainly a good choice. In terms of its overall level of effectiveness, it doesn’t fall far behind the Radians earplugs listed above. In fact, if these earplugs happen to fit your ear perfectly (and only if), you may actually find them to be even more effective at keeping water out of your ears. This is due entirely to the way the outer, lower portions of the earplugs are made.

If you’ve ever used a plunger, you know how well it is able to create a water-tight barrier around its target. While I couldn’t recommend sticking a plunger in your ear in good conscience, I’ll say that these Macks earplugs operate with the same sort of mechanism as a plunger. If you look very closely at them, you’ll find that they are equipped with three plunger-like layers. Long story short, this makes them extremely effective at keeping things out of your ears. They’re also extremely easy to put in and take out, which is another huge plus. A high ease of use is nice to see in any sort of product. 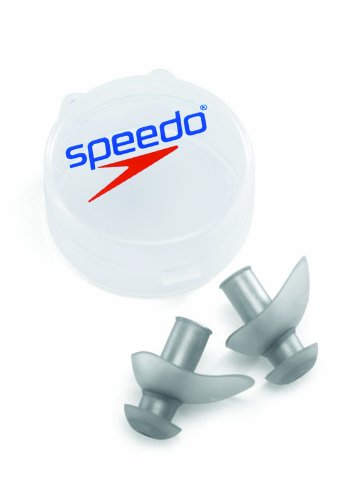 Speedo Unisex-Adult Swim Training Ergo Ear Plugs
$3.99
View on Amazon
4.7/5 Product Rating
While you’ve likely already become familiar with Speedo’s notorious men’s swimwear line, you may be surprised to find they actually make earplugs as well. The Ergo Earplugs, much like the companies bathing suits, do a great job of “contouring” to your ear, for lack of a better term. This ensures that, despite being low in the amount of material actually used in their make, they tend to be great when it comes to creating a suction of sorts on the outside of your ear.

Now, of all three earplugs listed here, you may very well find that these will give you the least amount of protection (though, compared to the average earplugs on the market, they’ll still be many times better). While this is certainly a large drawback, it has a few benefits which most earplugs (including the two listed above) just don’t have. One such benefit is their light weight, leaving you feeling less like you’ve stuck a piece of rubber in your ear. Another benefit is that these earplugs are nearly invisible to anyone not actively checking to see if you’re wearing them. This may be more favorable over having two giant pieces of rubber protruding from either side of your head.

Summary of Our Top Picks
Each of the above earplugs, while all of the same quality, are vastly different in terms of the means through which they operate. For example, while the Radians custom earplugs are guaranteed to work perfectly on all ears of all shapes and sizes, you may find them to be a little clunky in nature in comparison to the other two sets of earplugs. Still, they are the most likely to be the most effective earplugs for you, no matter the shape of your ear.

On the other hand, you may not want to have a giant piece of what may closely resemble dried putty in your ear. If you’re willing to sacrifice a bit of potential effectiveness, the Macks earplugs are a great second choice. They’re still much more effective than almost all other earplugs and are also much smaller than the Radians. But what if even the Marks plugs aren’t small enough for you? Speedo has a tendency of making things as small as possible and their earplugs are no exception. Despite still being extremely above average in terms of their effectiveness, they are near-invisible while you’re wearing them. Which earplugs you decide to go with all comes down to a matter of your own priorities.

What is an Earplug for Swimming?

When it comes to earplugs, as well as any other product meant to go in or on your body, your experience may be vastly different from another person’s experience. As such, while all of the three products listed above may be the very best in the business, you may find yourself wanting to go off on your own and see what products are out there. To keep your shopping excursion as easy and fruitful as possible, try keeping some of the following considerations in mind.

Do you care how your earplugs look?

While there are certainly a few models which meet somewhere in the middle of the spectrum, the vast majority of ear plugs will have you choosing between a sleek look with little effectiveness and a clunky look with a whole lot of effectiveness. If you don’t care how your earplugs look, this is no matter. Otherwise, keep in mind that an earplug which looks great doesn’t necessarily do the best job at all times. This all comes down to whether or not you prioritize practicality over aesthetics. Do you tend to wear shoes that were meant for walking?

Are you willing to undergo an initial learning curve?

Much like headphones, certain earplugs won’t feel all that great in the ear until you’ve used them a few times. Whether you need to learn how to use the ear plugs or the ear plugs need to learn the shape of your ear all comes down to the type of earplugs (a topic we’ll cover in just a moment) you decide to go with. Typically, the best types of ear plugs will require a bit of fidgeting at first.

How comfortable do your earplugs need to be?

If small earplugs worked just as well as large earplugs, nobody would make large earplugs. Of course, while larger models have a tendency of not budging unless you so choose them to do so, they may not always be the most comfortable thing to have in you ear. On the other hand, you’ll likely not even notice smaller earplugs after having them in for a couple of minutes. The obvious downside here is that you’re going to have to sacrifice at least some level of effectiveness. Once again, which one you decide to go with comes down to a matter of priorities.

Should your earplugs be easy to put in and take out?

If a set of earplugs is easy to use, that’s great. What could possibly go wrong? Well, if they come out easily, do you think you can trust them in the water? Perhaps. Perhaps not. It’s up to you to decide whether or not you’re willing to take the risk. Of course, nobody can deny that having a product which is easy to use has some benefit to it. Take the time to consider if you’re willing to spend an extra few seconds taking your earplugs out in the name of having a more reliable product.

While you could categorize earplugs through a varying degree of metrics all day, generally speaking, there are two main types of earplugs; custom earplugs and everything else.

Which of the above two types of earplugs you decide to go with depends entirely on what you prefer. I can’t even begin to tell you which is best. Though, I can offer a few features which you should always look out for, no matter which product you decide to go with. Keeping the following list in mind can end in much more fruitful shopping excursions.

More so than a whole lot of products, the type of earplugs you decide to buy will depend entirely on your priorities. Does their look matter? Do they need to be comfortable? Are you willing to put in a bit of work at first to come out with a more effective product? Neither of these questions have a right or wrong answer, though they do have an answer and said answers will ultimately play a deciding role in which earplugs you finally decide to go with. By keeping all of the above factors in mind, asking the proper questions and knowing which features you should look for in a pair of earplugs, walking away with the right product should prove a very easy ordeal.

Jonathan manages our Sports & Fitness, Outdoors and Automotive categories. When he's not writing and researching products he enjoys playing Ultimate Frisbee and spending time waxing down his 370z.