Best Pliers Set in 2021 - Pliers Set Reviews and Ratings
ThoroughlyReviewed is reader-supported. When you buy through links on our site, we earn a small affiliate commission at no additional cost to you. Learn more
We spent over 41 hours researching and testing 20 different types of plier sets and found that long lasting construction, durability, and variety of pliers in the set were most important. IRWIN vise-grip plier set scored high marks in every category and is our top pick. These well-known pliers feature non-slip handles that are comfortable to hold. The anti-pinch grip reduces hand fatigue during use. The ratcheting action allows adjustment of the pliers even when they are in an open position. These pliers come with a kit bag to keep everything organized and protected. They have a lifetime guarantee as well.

Look inside any tool box and you will more than likely find a few different kinds of pliers in different sizes and styles. The purpose of pliers is to take care of gripping, bending, cutting and compressing all kinds of materials. They are used in electrical work, building, plumbing, DIY projects, home repairs and much more.

When choosing the perfect pair of pliers, it is important to look at a few different factors. Consider what size pliers you will need, what kind of pliers you need for the projects you have in mind, how you will be using them and whether non-insulated, insulated or both are required. It’s always a good idea to have more than one pair of pliers on hand especially since there are several types that can be used for different tasks. 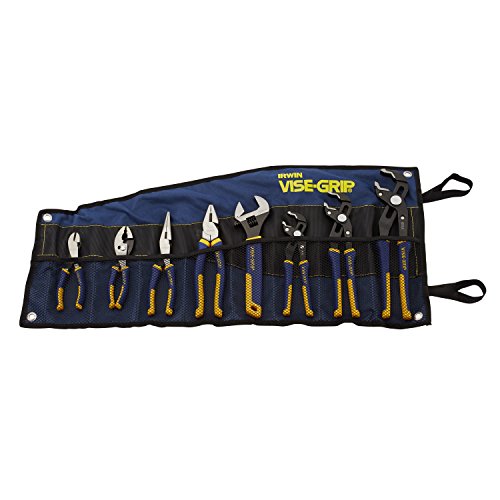 2,090 Reviews
IRWIN VISE-GRIP GrooveLock Pliers Set, 8-Piece (2078712)
$77.49
View on Amazon
5/5 Product Rating
IRWIN is a well known name in high quality tools. These Groovelock pliers have a lot of features that make this the top pick when it comes to pliers sets.

These pliers are non-slip and feature anti-pinch ProTouch Grips that reduces the hand fatigue and provides plenty of comfort when you are using them. These Groovelock Pliers have the press-in-slide method for adjusting the pliers.

Groovelock features a ratcheting action that allows the pliers to be adjusted even when they are in the open position. Included in this pliers set are the most commonly used pliers:

There is a kit bag that comes with this set as well to keep everything together and easy to grab when you need it. The all purpose jaw of the pliers can grip around square, hex and flat shapes equally well. These long lasting pliers are crafted from metal injection molding so they are durable and strong too. IRWIN stands behind their pliers by offering consumers a lifetime guarantee on the set. 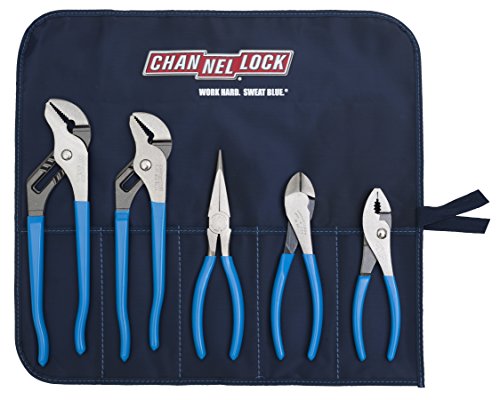 561 Reviews
Channellock TOOL ROLL-3 5 Piece Pliers Set | Fast Release Handy Vinyl Pouch Features Long Nose, Diagonal Cutter, Slip Joint, and Tongue and Groove (2)...
$70.76
View on Amazon
4.8/5 Product Rating
If you’re looking for a convenient set of pliers for your tool box, take a look at these Channellock pliers. There are 5 pliers in the set that come in a convenient tool roll that makes it super easy to grab and take the tools on the go. Including in this set are:

The Permalock fastener prevents nut and bolt failure in the tools and keeps them in great condition for years. The edge is a patented, reinforced edge that resists stress breaking when using them on various projects. The teeth of the tongue and groove pliers have been laser heat treated so the grip is strong and longer lasting.

All of the pliers in this set are made from high carbon steel to ensure exceptional performance. The electronic coating provides superior rust resistance. The blue handles on all the pliers is a Channellock trademark, making them easy to spot and grab from the tool bag or box. If you want a set of pliers that will stand up to regular use, choose these USA made Channellock pliers. 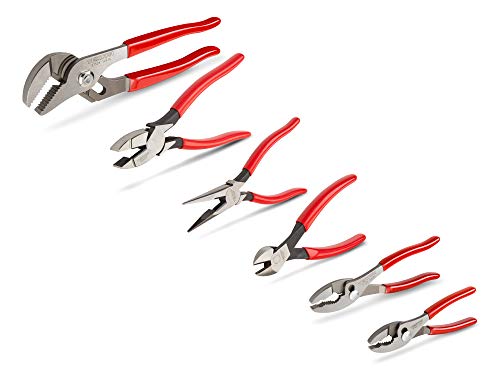 48 Reviews
TEKTON Pliers Set, 6-Piece (Long Nose, Diagonal Cutting, Lineman's, Groove Joint, Slip Joint) | PLR99020
$56.49
View on Amazon
4.7/5 Product Rating
This six piece set of pliers from Tekton enables DIY-ers and professionals to be ready for any job that requires the use of pliers. Construction is from corrosion-resistant alloy steel, making them long lasting and durable. They feature nut and bolt fasteners that allow the tension to be adjusted and maintained throughout the life of the tool.

The non slip grips make these pliers easy to hold onto and use, even on hot days when your hands get sweaty. The bright red handles make them easy to spot in your tool box so you can grab what you need quickly. Included in this set is:

Each of these pliers is designed to take care of different repairs and tasks so you have whatever you need when you need it. These high quality tools are the perfect addition to your tool box or bag.

Summary of Our Top Picks
Pliers are tools that are used often in DIY projects and home repairs as well as vehicle repairs. Having a good quality set of pliers in your tool box will help you be prepared for any type of job that requires the use of them. There are several different types of pliers available which is why a set is such a good idea.

Purchasing a set of pliers allows the user to have several different kinds to choose from according to the job at hand. The three top rated pliers sets reviewed above are all excellent choices for your own tool set. Each of them have a variety of the most commonly used pliers and a convenient bag or tool roll to keep them all together and organized.

To learn more about choosing the right pliers set, read the buyer’s guide below. This information will help you understand the differences between the pliers and will make sorting through the different brands and types available much easier.

There are two basic designs for pliers:

Pliers are used around the house and garage for a number of tasks including tightening and loosening bolts and nuts, taking nails out of wood, installing wire, shaping wire and much more. Remember that not all pliers are designed for electrical jobs. The handles need to be insulated so users are protected from shocks if they are being used for electrical repairs or other wire work.

If you’re handling a heavy duty job, make sure that you use a pair of pliers that can handle the tough jobs. Don’t use lightweight pliers for heavy jobs or they can break. If you’re going to be turning nuts, find another tool to handle the job such as a wrench.

Below we have listed the 9 different types of pliers and what they are good for. We have also listed a little bit about their characteristics as well.

Things You Shouldn’t Do with Pliers

Pliers are a much needed tool for your tool bag or box. They have plenty of uses that you could encounter on a regular basis in the home and garage as well as on the jobsite. There are many different pliers that are included in a pliers set. The purpose of having a good quality multi-set of pliers is so that you can have a variety to choose from that will encompass many different jobs.

The three top rated pliers sets featured above have several different types of pliers included in each set so you have a variety of choices when you do jobs or projects around the home or workshop. It’s also easier to buy a set that already has the different pliers in it rather than having to individually purchase each type.

It’s important to have good quality tools in your tool box. The information in this guide is to provide you with the knowledge you need to sort through the different choices and make a decision on a long lasting, durable set that you will have for a long time.